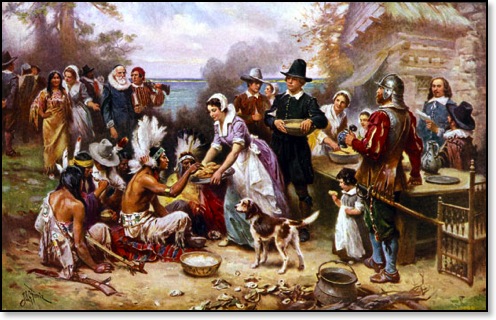 The traditional thanksgiving story, as taught in schools across the United States, either says something along the lines of:

When the poor helpless Pilgrims came to the New World, they were wholly unprepared for the harsh winters, and totally ignorant on how to get food to grow in the soils of this new land.  After nearly starving to death the first winter, a kind Native American named Squanto showed them how to plant corn and to use fish as fertilizer. The result was a bountiful crop that was able to supply all their needs. In gratitude they had a feast and invited the natives to share in a day of Thanksgiving.

Another version, usually taught on American College Campuses, says something like:

A group of invading white protestant mauraders stole land from the hapless Native Americans, and killed off as many as they could. Utilizing their ill gotten gains the enriched themselves at the expense of the poor peaceful natives. To celebrate their good fortune and vanquishing the poor natives, they had a feast of Thanksgiving.

The first is a beautiful tale that most Americans know well. The fact that it is mostly a fairy tale has not diminished its popularity. The second is also not true, but has gained acceptance among leftist whose aim seems to inspire as much hate and division as possible. The true story of the first Thanksgiving is a compelling narrative of triumph over adversity, and an even has a strong moral to it.

The story of the first American Thanksgiving

In 1620 a band of travelers left their homelands for good, risking all for a chance at freedom. With both anticipation and foreboding, they boarded a ship called the Mayflower for the long journey to a new world and a new life. Due to circumstances beyond their control, they had to leave much later that summer than they had anticipated. When they arrived, a harsh Little Ice Age winter was nearly upon them. With it already fall, they quickly learned how ill prepared they were for the task ahead of them. With no time to waste, the area for the settlement was chosen and dutifully cordon off. The spot where they would build their new life was an abandoned Indian Village. Quickly, slipshod housing and storage sheds were built just in time to shield them from the heavy snows and bitter cold. They had some meager supplies, but not enough to last the long cold winter ahead.

On top of all the challenges they faced, was the fact there was more acrimony than harmony among them. In fact, they had nearly mutinied before even sitting feet in the new world. The compact of rules they all agreed upon was all that kept them from ending their adventure before it even started. With winter upon them, the compact would be stretched to the limit. Food was rationed, resulting in hoarding and fighting over the sparse provisions. As winter wore on, the Pilgrims became ravaged by hunger and disease. A harsher winter the small group of Pilgrims could not of imagined. When spring arrived, the final toll on the group was horrendous. Of the original 102 souls landing at Plymouth Rock, nearly half had died.

Determined to get the group back on its feet, Governor William Bradford went to work trying to organize the weak and disheartened group into a single working unit. No private property was allowed per their sponsors instructions. The plantation was to be a cooperative, the new worlds first working commune. Each member was assigned tasks that were to benefit the group as a whole. After the sponsors share was separated out, all the food grown, trapped furs, and gathered provisions were to be shared by all.

The results of the pilgrim’s labors at end of the first summer was disappointing, to say the least. The food stores meant to get them through the winter fell far short of what was needed. There was a justified fear of the coming winter and William Bradford had to have the storage sheds locked up and fortified against food riots. The reason for the poor harvest and insufficient provisions was clear enough. Throughout the summer there had been grumblings about some being lazy and living off the backs of the others. They felt if they worked hard it was as if they were being “slaves” to the wants of their neighbors. The result was the pace of work was set by the the laziest and most slothful among them.

Even with another harsh winter upon them, and stores low, the Pilgrims prepared a traditional harvest festival and feast. The men went out and shot deer and fowl (which probably included turkey), the women gathered what they could, and a feast was prepared. Their Indian neighbors were invited, and even brought venison to share.

Soon after the feast was finished, the Pilgrims were facing famine again.  As there was not enough food to make it through the winter, all were placed on half rations. By the grace of God and their rationing of the thin supplies, the Pilgrims survived their second winter without the death and disease of their first. Nonetheless, they were starving by the time spring arrived.

The summer of 1622 was a repeat of the previous one with the group being short on those willing to labor for the common good. When harvest time arrived the Pilgrims found themselves only meagerly better off then they had been the previous year.

After passing another long and hungry winter Governor Bradford had seen enough. The Pilgrims were barely surviving after two harvests, and 60 more settlers were scheduled to arrive in late summer. That meant they would need enough supplies to feed 60 more mouths! Another substandard harvest would likely mean mass starvation and loss of the settlement.

In the spring of 1623, Bradford declared the cooperative arrangement was over. From then on, each family would be responsible for their own welfare. Lots were assigned, and people were told what they grew is what they would eat.  As Bradford would later comment, the transformation was dramatic. Industry flourished as people worked sun up to sun down to get as much as possible from their plots of land.

When the fall of 1623 came the harvest was spectacular. Instead of meager supplies that would of meant a daunting winter, their was plenty for all. Even more remarkable, the Pilgrims had managed to grow a substantial amount of cash crops like tobacco too!

The first two years the Pilgrims were thankful just to be alive. Only after the harvest of the third year were they finally able to give thanks for a bountiful harvest. From than on they could look forward to a future filled with promise. The fact is, after the fall of 1623 the Pilgrims would never again face starvation.

Today most remember that first celebration of 1621. True it was a emotional one, they had lost nearly half their numbers the previous winter and the future was bleak. Little is written about the harvest feast of 1623, but for certain it was more joyous than the first. Not only were they not facing starvation for the first time, but they had been joined by old friends too. For the future country that would sprout from these hearty souls, the harvest of 1623 holds a special meaning. It was at this celebration that the promise of this new land was revealed. It was also the first time that the power of capitalism and the folly of socialism was irrefutable shown.

What about Squanto?  He was real and with a compelling story all his own.  A Christian English speaking Indian who had spent some years in Europe, he befriended the Pilgrims. The fact that there was a English speaking native familiar with their ways must of seemed like divine providence at the time (and probably was). Squanto did help the Pilgrims in many ways. He, as the legend says, showed them how the Indians grew and prepared their corn. Contrary to the legend, food was not his greatest contribution towards their survival. His ability to negotiate, on their behalf, with the local tribes proved invaluable. Through him the Pilgrims were able to trade with the local population, and set up alliances. It was because of his efforts the Pilgrims relationship with the local inhabitants was mostly peaceful and fruitful. In fact, it would not be until after this first generation was gone that any substantial conflicts would arise between Plymouth settlement and local Indians.

Undeniably the true accounts of those first Thanksgivings is much more compelling and inspiring than the fairy tale version. A story of endurance, trials and triumph, that would be played in other settlements as well. People who forged colonies and eventually a new nation. This is the Thanksgiving story that is truly American, and an inspiration to all.