After last weeks death of Fidel Castro, many saw fit to eulogize the dictator with near poetic adulation, while others were more reserved in their praise. Still, the left in general waxed nostalgic about the long lived cold war relic. Of course, denizens of little Havana in Florida had quite a different take on his death. They danced until dawn, while holding in their hearts the memory of those Castro insured would never dance again.

It is no secret, the left admired Castro, as they have many tyrants. Spielberg, Redford, and Campbell and a host of other A-listers visited him over the years. His head henchman, Che Guevara, has his face pasted on t-shirts to this day. The fact he oversaw the murder of thousands of dissidents seems not to bother his admirers. Many of those executed in the wake of Castro’s takeover were guilty of no more than owning a shop, or asking why the government was stealing their property. Bob Beckel, while on the Fox’s The Five, called Guevara a freedom fighter, and Jane Fonda has lamented she’d never slept with the ill-bathed revolutionary. It occurred to neither of them, the defenders of freedom are defined by what they fight for, not by what they fight against. Fidel and Che fought for enslavement to the state through brutal control. 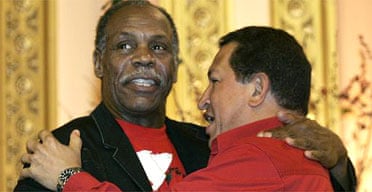 Of course, Castro is far from the only example of the left’s love affair with Latin American despots. The sadistic Sandinista regime was whole heartedly embraced by the left. Similarly, a long list of celebrities, and press apologists, flocked to Hugo Chavez’s side, even as he raped his country. Hollywood elites like Sean Penn, Danny Glover, and Oliver Stone stood by Chavez right to the end. The Chavez fan club also included many Democrat politicians, most notably Joseph Patrick Kennedy, and Gregory Meeks. Of course, the list of Chavez admirers among the media is exhaustive. It includes about half of the reporters, anchors, and left of center pundits currently on the main networks, and most of the major newspapers.

The fact is, the left has a long history of embracing dictators. In 1927 a junket filled with progressives went to Russia to study what Stalin was doing. Many of them came back excited about Russia’s new economic system. Many of these Red Russia enthusiast later served served under Franklin Roosevelt. Unsurprisingly, Uncle Joe had many in the media in his pocket as well. The Liberal muckraker Lincoln Steffens famously exclaimed of the Red Menace, “I have seen the future and it works!” Steffens also pronounced Mussolini as “formed by God “out of the rib of Italy.” In fact, many of those who admired Stalin, also swooned over Hitler and Mussolini before the war. Most notable among the fascist fan club were George Bernard Shaw, and H.G. Wells. Well’s extolled western progressives to become “liberal fascists” and “enlightened Nazis.” The full list of communist and fascist admirers would read like a Who’s Who of early twentieth century progressive liberals.

Given this, it is no wonder that modern college campuses are becoming cloistered dictatorial schools of liberal ideology. Run largely by socialists, most universities are bubbles where uniformity of thought is demanded. On campuses where freedom of speech was once encouraged, now mini tyrant enforcers guard against the politically incorrect. Consequently, conservatives, who consider speaking in these bastions of left wing lunacy, have learned to expect threats of violence, riotous protests, and viciousness of all sorts. That is, if they are allowed to speak at all! In contrast, safe spaces await the infantile liberal babes yet too fragile to hear opposing points of view. Apparently, university thought police, for fear of contaminating incubating leftest, believe dissenting opinions must be silenced. Fitting, perhaps, for those whose heroes have mostly been dictators.

Since the French Revolution, the left has believed in obtaining their ends by any means available. Progressive icon Woodrow Wilson once said, in regards to implementing socialism, “Limits of wisdom and convenience to the public control there may be: limits of principle there are, upon strict analysis, none.” Absolved of conscious by their leprous ideologies, the left feels free to indulge in whatever methods fit the moment. Arrogantly, they advance agendas regardless of the carnage incurred. Their souls are but a troubled reflection of those they idolize, with the only real difference between them and they being opportunity.