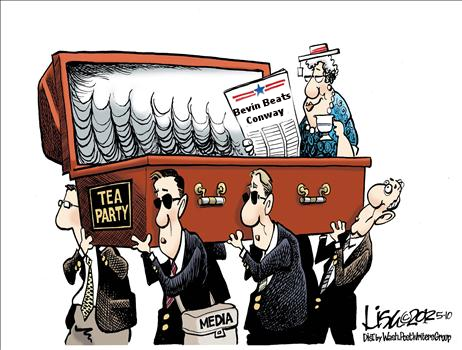 The Tea Party is dead, just ask any member of the Democratic Party or their unofficial spokesmen in the main stream media.  The conservative choke hold on business as usual is losing its grip according to those in the know. The Washington Cabal, as Ted Cruz likes to call them, is certain of this fact.  David Axelrod, a card carrying member of the Cabal, was invited to a summit of Republican presidential candidates in June. He declared that voters in 2016 will want an insider to “manage Washington”. Unremarkably, mavericks like Cruz and Carson were not invited to this meeting.

This all happened before Trump and Carson’s domination of the polls as well as the rise of Cruz. Of course, the establishments in both parties have declared their rise as an aberration; a specter whose ghostly visage is visible in the twilight, but will disappear as the light of day approaches. Given such heart felt beliefs, one can only imagine their confusion regarding the present state of affairs.

On Nov. 3rd, the electorates across the nation rejected Axelrod’s proclamation. The idea that the public is looking for someone to manage America’s decline, and who can get along with back room political power brokers was flatly repudiated. The voters apparently missed the last rites given by the media priesthood to constitutional conservatism, either that or the 2nd Tuesday in November has become the Day of the Walking Dead. Nowhere was this more apparent than in Kentucky.

The Blue Grass state, gave a landslide victory to Tea Party favorites Matt Bevin and Jenean Hampton. Bevin, the Governor elect, and Hampton, Lieutenant Governor elect, became only the second Republicans to win the governorship in 48 years. They campaigned as outsiders looking to take on the establishment politics of the state. While polls gave the edge to the establishment Democrat, the voting results showed a very different story. Bevin crushed the Democrat, Jack Conway, 52.5 to 43.8, this for a man the mainstream media called unelectable. Bevin even had to overcome some in the Republican party as well, a few even sided with the Democrat Conway. At one point the Republican Governors Association started to pull ads supporting Bevin’s candidacy. Nonetheless, Bevin and Hampton, the first woman and first black elected to state wide office, persevered with grassroots support.

Of course, Tuesday results went far beyond Kentucky. Across the nation the liberal agenda was turned back. In Ohio, marijuana legalization was defeated, as was a Houston proposal to let men in dresses peek in on little girls in the restroom. San Francisco is not exactly a Tea Party town, but nonetheless they were able to come to their senses long enough to kick out the sanctuary city’s radical defender of illegal alien law breakers. Other examples include the bay area’s rejection of new regulations on people who rent out rooms, and Portland, Maine’s refusal to raise the minimum wage to $15. Across the nation the Democratic party poured huge sums of case into state legislative races only to see more losses than wins. Republicans either held the line or added to their majorities in states across the nation. For certain there were conservative loses, a school board membership here, a mayoral race there, but nationwide Election Day turned out to be an extremely lopsided event.

There is ample evidence that this trend has serious implications for the Presidential race as well. Not only are outsiders and anti-establishment rock throwers making waves within the primary, but new polling suggest they could be poised to take the Presidency as well. The Quinnipiac University Poll shows that Ben Carson would devastate Hillary 50 to 40 percent. Ted Cruz similarly out paces her 46-43.  More conventional candidates do well against Hillary too, with Rubio/Christy edging her out 46-41.

The truth is, the true zombies this election season are not the Tea Party or the conservative movement, but the brain dead liberals who continue to push an agenda the American people reject. Illegal immigration, transgender insanity, gay agendas, draconian regulations, increasing taxes, and a ballooning debt are all things the American people overwhelmingly oppose, but they are all centerpieces of the Democrats radical liberal agenda. In response to resistance to their plans, they rattle on about wars on women, and racism under every rock. Hyping hate and using division in a sick effort to stay in power, not so they can advance the people’s will but to oppose it!

If conservatives are to continue to beat back this invasion of spiritually dead and philosophically blind liberals, they must reject the Washington elites of both parties. To borrow a liberal line, start speaking truth to power. Fighting liberals at every corner, on the streets, and in the halls of power, not to just hold the line but to beat them back and regain conservative ground. In short, conservatives must be just as relentless in advancing their ideas as the liberals have been in implementing theirs.