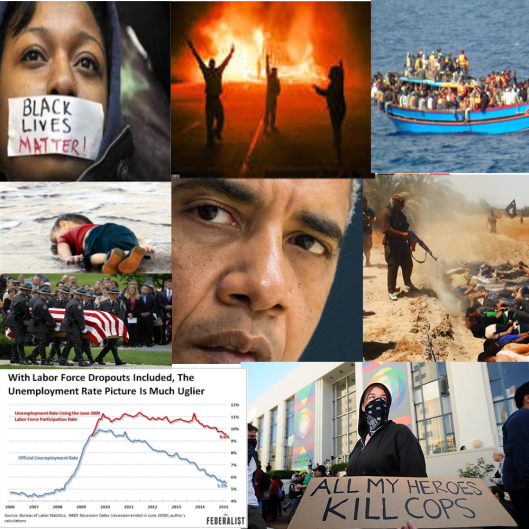 A whirlwind of man made storms have encompassed the globe. Riots, murders, wars, genocide, expanding poverty and a massive refugee crisis unlike anything the world has ever seen. Few seem to want to wade into the fray and seek out the common link in the seemingly unending parade crises. Maybe it is because the truth is too inconvenient or would involve, at least for the left, too much introspection.

The common thread is he who was once called the anointed one, the black messiah, and man of promise; Barack Hussein Obama. His one and only mandate was to fundamentally transform the United States and its relationship with the world. To this end, he has been an unqualified success.

For the U.S., the Obama Revolution has resulted in a near stagnant economy and a reversal of decades of advancement for minorities and women. The President’s radical Supreme Court appointees have, in a dangerous act of elitism, declared themselves a super legislature and made laws out of whole cloth. As a consequence, religious freedom, a founding tenant, is now being challenged in court and Christians sent to jail for their faith. Race relations in the United States are now near their 1960’s low with similar results. In many cities, burned out shells now stand where once thriving black businesses once stood. A bloody offshoot of the rising discontent is the recent killings of police officers across the nation. Economically, rising stock markets, once a bellwether of good times, now seems to belie the struggles of families to make ends meet.

As much he can be cited as the originator of much of what is ailing America at the moment, it is the international stage where he can claim the biggest impact. Always the ideologue, he decided early on that America leadership was the problem, not the solution. As one of his staffers put it, it was time for the U.S. to “lead from behind.” Under this new paradigm, old foes would find new room to challenge the United States on a myriad of issues.

The crisis in Ukraine, Russia’s blatant stealing of American oil resources in the Arctic, China’s territory grabs and veiled threats to country’s around Asia are all symbolic of Obama’s foreign policy disaster. Even his recent opening of relations with Cuba, with no demands for any changes in the country’s policies or human rights record, speaks of the Presidents penchant for weakness.

As bad as the foreign policy has been regarding Asia, Europe and the Western Hemisphere, it is in regards to the Middle East where his ineptness has had the greatest impact. Strategic disengagement, coupled with selective interference with the internal affairs of countries in the region, has created one of the worst humanitarian crisis history.

The Arab spring was wholeheartedly supported, and encouraged even to the abandonment of long standing allies. At the same time, an uprising in Iran was ignored! Internal meddling led to the toppling of the Libyan dictator and the rise of unending fighting among the factions there. Encouraging the Syrian civil war gave rise to ISIS and a situation that serves no one’s interest. As if it were timed, the Obama administrations in turn abandoned Iraq. The one country the United States had a moral and strategic obligation to support. Nonetheless, the military was prematurely pulled out and it left open to ISIS. The resultant invasion, and genocide, by one of the worst incarnate evils the world has ever known was predictable. Someone was going to rush into the power vacuum, and radical Islamist were the only game in town.

The massive refugee crisis (not migrant) in Europe is a direct outcome of President Obama’s inept policies. As troops are activated, riots tear apart communities, and cultural unity is dismantled, few are blaming the real culprit whose policies led the present situation.

The agreement with Iran is possibly the apex of Obama’s ineptness. Instead of blocking it, it merely lays out a time table for Iran to acquire a nuclear arsenal. As a result, a Middle East arms race is taking shape. Countries that, up til now, had no nuclear ambitions are taking a second look out of a sense of self-preservation. Arsenals are also being built up and armies enlarged as the entire region spirals into chaos, all of which has but one man’s fingerprints.

President Obama will soon be relegated to history, but his impact will not soon be forgotten. In his wake he has left a trail of misery and liberty lost. While political pundits and the media debate his legacy and the President talks about his achievements, no one need worry; President Obama’s legacy is assured. He carved it into the soul of society and wrote it in blood.