The Collapse of the Global Warming cabal may not be imminent, but its credibility implosion continues unabated. While children still learn how the polar bears are going extinct (despite a rising population) and the coastal cities will all be underwater, the extent of alarmist deceit is being reveled on a nearly daily basis.

From Al Gore’s heralded work of fiction, An Inconvenient truth, to the latest revelations of a wholesale rewriting of the temperature data, the Climate alarmists have shown themselves to be devoid of integrity. If Gore’s book and movie would of been done from a skeptics point of view, the naked manipulation of data, and even out and out lies, in them would of been attacked the world over. He would of been turned into a laughing stock and been the butt of endless jokes. Of course, that is not what happened. Instead of being held accountable for his purposeful frauds, he was given a Nobel Prize and an Oscar!

The Hockey Stick graph that erased the Little Ice Age and Medieval Warm Period while predicting unending temperature rises, was all the rage until shown to be false. Of course it was not the only one, many alarmists graphs seem to omit climatic events like Medieval warm period, as well as the Roman and Holocene Climatic Optimums, preferring the public not to know the present temperatures are actually cool when compared to these previous warm periods.

NASA rewrote history for years as well, only correcting their mistakes when forced to by Real Science blogger Steven Goddard. They had simply made up numbers that fit the story they were selling. The truth is the warmest year on record for the United States is not 2012, and especially not 2014, but was 1934. In fact, the warmest decade on record is the 1930s. NASA more recently announced to the press that 2014 (yes, the same year that saw record breaking cold in the U.S. and Europe) was the warmest, only to quietly whisper later they were at least 38% sure it was.

It was so warm during the 1930s that records were broke going back to the founding of the United States. The AP article below from March 26th, 1933 reveals some of the panicky reporting from the time. 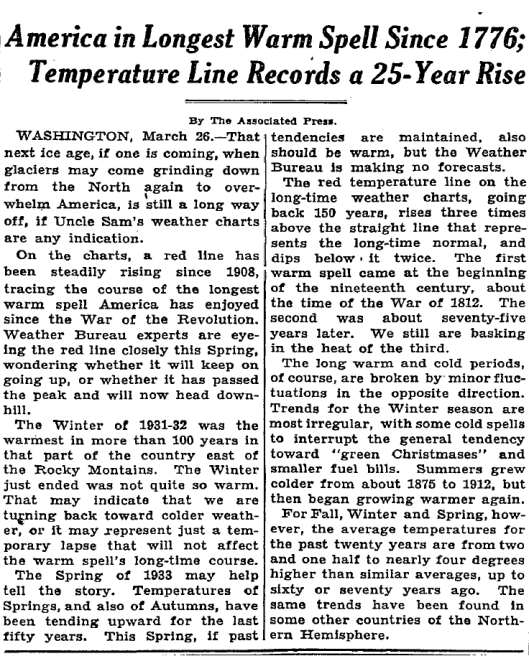 One should remember, according to the U.N., global warming did not start until around 1950.

The real story behind the headlines lately is not the alarmist rhetoric taking up headline space, but the data behind the headlines. What was once sacred to science, data, is now clay to be manipulated, coerced and twisted until it is (politically) correct. Bellow is an Australian example of how temperature readings are adjusted to fit the predetermined outcome.

Here is another example of how data is manipulated, this time form New York.

These are but two of a couple of thousands of examples that are being found across the world. The Telegraph, in a recent article, called “The fiddling with temperature data is the biggest science scandal ever.” Their research shows the phenomenon is going on world wide. It is as if there is a competition to see whose published data shows the greatest impact from Global Warming. In this competition, the actual temperatures are irrelevant, it is what they claim that counts.

In the magical world of Anthropogenic Global Warming (AGW) “science” cooling trends can become warming trends and was once considered historical fact can be erased and rewritten. Even recent history, like Iceland’s “sea ice years” of the 1970’s can go from record cold to average and above. It does not matter what the facts are, data that does not fit the alarmist narrative must be “adjusted” until it does.

Of course the the great alarmists deception is not limited to manipulating data or even creating it out of thin air. Real and undeniable events, natural in origin, are used to create a sense of dread in the public as well.

The Murray-Darling river in Australia is drying up, undeniable evidence of climate change but is it? The fact is it, and other river basins like it, follow natural cycles. It has been flowing and drying up for eons. As the Murray-Darling Basin Authority says, “Drought and flood are a natural phenomenon in the Murray–Darling Basin.” Apparently they did not get the memo to rewrite their history. Similarly, hurricane Katrina and Typhoon Haiyan, have been pointed to as proof positive of a climate gone awry. Some have even gone as far to call these storms man made. The truth is, hurricanes/typhoons/cyclones are not getting more prevalent, they are getting less. Steven Goddard put together the only slightly tongue in cheek graph shown below. The truth is hurricanes have reduced in number, not because CO2 has gone up (although there is a correlation), but due to less pooling of warm water on the ocean surface. Why that has become less common is something needing more research, but likely is related to cyclic current changes.

Demagoguery has been defined as saying what you know to be untrue, to those you know to be ignorant, in order to advance an agenda. In this light, the alarmists have become the greatest demagogues in history. Perhaps their greatest act of demagoguery relates to the polar ice caps.

The polar regions have especially been the focus of much intentional misinformation. The collapsing West Antarctic Ice Shelf is a prime example. The lynchpin glacier holding the shelf in place, known as the Pine Island Glacier, has been being undermined for years. Not from warm sea water as is widely reported, but from a subglacial volcano discovered in 2007.  Even as scientist are forced to admit this, the public are kept in the dark, left with a lie ringing in their ears.

The fact the Arctic ice has receded in the past decade is undeniable. Just as the fact there has been a slight warming trend during the late twentieth century (and cooling spell as well) are not debated. Saying either of these two are unprecedented, or somehow connected to the activities of mankind, that is another story altogether. It has already been shown that there is nothing extraordinary about the current weather, but neither are fluctuations in the amount of ice above the Arctic Circle out of the ordinary.

In the 1920’s the Arctic ice sheet shrunk dramatically, from newspaper accounts at the time it was markedly worse that today. The main difference between than and now, no alarmist were excitedly using the event as a scare tactic prop in a global power grab. Though less aware of the mechanics, the researchers at the time noted the warmer water mixing into the normally frigid Arctic ocean.

There is plenty of evidence that shows the Arctic ice cover is reliant on the temperature of the water currents. Air temperatures, to a great extent, are also impacted by water temperature. That ocean currents vary in temperature over multi-year cycles is not new, it has been observed over and over again. As veteran German journalist Ulli Kulke points out in a recent post on his private blog, “The Franz-Josef-Land islands, which can be reached by boat only a few weeks a year, could be reached for 8 months in some years.” Anecdotal evidence of the north being much warmer in the recent past. In fact, a quick bit of research and one can find warnings about Arctic ice melts from the 1920s, 1940’s as well the 1960’s.

The recent hoopla about open water at the North pole is old news as well. Since the advent of Nuclear Submarines, the U.S. Navy has found the polar ice missing going back as far as 1958. Something that makes The New York Times claim of ages old ice being turned to liquid seem all wet.

The Skate and Seadragon at a North Pole rendezvous circa 1962

Today, what is a normal event is declared an unprecedented anomaly. The routine and the mundane are causes for alarm while natural reoccurring phenomenon are declared to be previously unknown. Nothing is what it seems in the fantastic world of man made Global Warming.

This type of climate alarmism is not new, it has been a reoccurring theme over the past 150 years. Alternating between fear mongering over a coming ice age and cataclysmic warming, about the only thing the scientific community has been consistent on is being wrong. What makes this time different, is extent the left has latched onto the fanciful claims, using it as a means to their ends. Lies, exaggerations and deceptions are all on the table in their high stakes gamble to take control of the world’s energy supplies, and by default its wealth.

Make no mistake about it, this is not about the climate, environment or being green, it is about money and control. Anyone who has seen Green Party signs left to rot on streets in Europe, large caravans of SUV’s dropping off guest at climate summits or the private jets carrying global warming charlatans to their next high paid speaking engagement should know this. The globalists, socialists, and liberal elites are seeking absolute control over the world’s energy. A massive undertaking that means drastically reworking the global economy. The U.N. Climate Chief recently talked about the difficulties faced in by them in remaking the world economic model, referring to it as the hardest task they have ever undertaken.

Man made climate change is little more than a world wide economic justice campaign/power grab disguised as a scientific and moral crusade. One that seeks to level the difference between high and low by making everyone low (with the significant exception of these left in control). The plot has been worthy of a Pinky and the Brain cartoon or that of a badly acted B movie. Hilarious in its implementation but deadly serious in its consequences, its amateurish attempts to drive society into a panic have thankfully failed. Victims of their own lies, it is only a matter of time until all the world sees them for who and what they are.