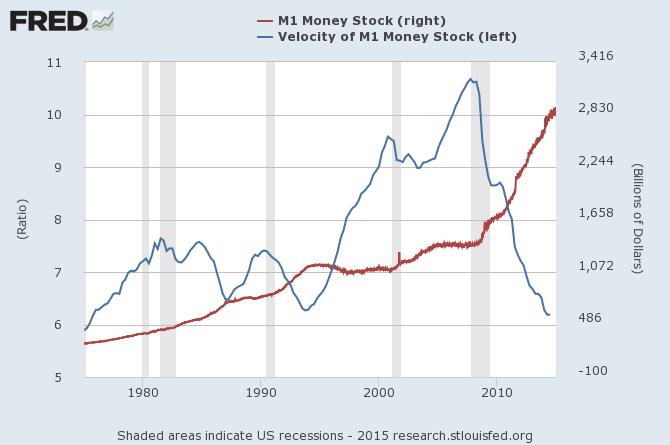 Anyone who has been a long time reader of The Conservative Mind is familiar with this graph.  It is one that has been shown no where else. What the graph illustrates the the extent to which the FED has distorted the American economy.  The velocity at which cash is flowing in the economy is the lowest in approximately 40 years!.  At that time the M1 money stock was less than 1/10th of what it is today. At no time in American history has the money supply and velocity been so out of balance.  The amazing thing is this trend is still continuing. The graph above shows the latest data from the Federal Reserve Economic Data (FRED) site (last update Dec. 1st, 2014).

Of course most economist are more interested in the M2 money supply, M2 incorporates M1 (cash and checking) and adds savings and money market accounts. This accounts for the increased volatility of M1 as compared to M2.  If one puts money into a savings account he reduces the M1 supply but M2 remains the same. While this tends to make M2 less volatile, it still follows the same basic trend. M2 Records on FRED (Federal Reserve Economic Database) Only Goes Back to 1980. The Danger this Graph Illustrates is the Possibility of Runaway Inflation. As Velocity Increases to Normal, Prices will try to Equalize to the New Paradigm. The Result will be Stagflation with High Interest Rates and Inflation like in the Carter Recession, but likely much worse!

The graph, while startling, does not show the whole story.  Other economic statistics show that this huge cash bubble is a lopsided event. FED magic cash has not been spread evenly but has been concentrated into the hands of the extremely wealthy. The top .01% are doing very well while at the same time savings are down and wages are stagnant for most Americans. Welfare is at all time highs while workforce participation hits historic lows. Last month alone another 273,000 left the workforce. The astute observer should realize all of these statistics are connected. The economy is not in, nor has it really ever entered, a recovery. It has been being lifted up by Federal Reserve hot air and little else (the little being the energy sector). This observation is confirmed by the Federal Reserve’s continued use of stimulative monetary policy in the form of 0% interest rates as well as the historically low velocity of the money stock. The fact is,  not only is money not moving as it should, we have the added conundrum of low savings. All this shows the stimulus may be going somewhere, but it is not going into the pockets of John Q, Public.

As if to put an exclamation point on the economic state of the U.S., the census bureau shows that businesses are dying faster than they are being started. The first time in 35 years this has happened. Last time being during the height of the Jimmy Carter Recession/Depression. (Read Gallup:American Entrepreneurship, Dead or Alive) The difference being this is supposed to be the middle of a recovery! America, the Land of Opportunity, now ranks twelfth in business startups.

The United States has shown its pioneer spirit in all the wrong ways. It has gone where no one has gone before, forging a path hopefully few will follow. Where before bubbles were evident by the way cash flowed, today it doesn’t flow. The money stock is instead puddling in the hands of a few to the detriment of everyone else. Consequently, one has to look elsewhere to find out the real state of affairs. Doug Short of Advisers Perspectives put together the following graph of companies liabilities to market worth to illustrate that the market is indeed in a bubble. Today’s valuations exceed that of all other bubbles save the Tech Bubble.

While people quibble over statistics showing GDP growth and falling unemployment numbers, the facts behind the hoopla are sobering. If the same percentage of the American people were out of work before the financial collapse the U.S. would be well into double digit unemployment. Almost all the drops in unemployment have come on the heels of people dropping out of the labor force, not joining it. The truth is, their is simply not enough jobs to keep everyone who might want a job employed.

This is not to say there has not been a recovery. For the ultra rich this economy has not only helped them recover, it has been an economic bonanza. On the other hand, ObamaCare and a unprecedented amount of costly regulations have created a repressive environment that young companies can’t deal with and new ones see as bricking over the door to economic success. Similarly, Dodd-Frank is slowly strangling out small banks. The bread and butter of the American economy, small business and small banks, are being suppressed in favor of large “too big to fail” institutions. Great for the well healed, for the country, not so much.

Again, what should be realized is all of this is connected. Small businesses, which drive employment, are failing; this is giving us high welfare and low participation rates. As a result, people are not spending nor are they saving. This along with the cash crunch after the financial collapse caused the Federal Reserve to try to forestall deflation by printing. In classic case of overreaction, they have distorted the economic fundamentals beyond recognition. Not only this, but given the nature of the system the wealthy were the only ones to have access to the stimulus dollars, so they have been its main beneficiaries. The wealthy have used that money to buy stocks, art, cars, expensive homes and other high end items. All of these have seen prices go up in response. None of this is sustainable, and whats worse is there is nothing fall back on when it all falls apart (which it must).

The truth is, while there has been some good economic news, almost always it comes with an asterisk. Novembers Jobs report was heralded for adding 321,000 jobs even thought that translated to only 4,000 additional net employed.  Last month would of looked mediocre jobs wise except that 273,000 people dropped out of the work force. Nothing is straight forward and nothing is what it seems.

John Mauldin of Mauldin Economics put out a report on the year ahead and cited many of the same concerns.  Basically, their are more bad omens than good. One of the statistics he noted was the fact that the energy sector has been responsible for a full 1/3rd of US GDP growth. In essence, it was not just Mother Fed keeping the economy afloat, fracking has done its share as well. If the present collapse in prices leads to a subsequent energy sector pull back, the U.S. could have the trigger that pulls down the American house of cards economy. Even if that does not happen, Japan’s Keynesian mess, China’s woes, or even Europe’s never ending train wreck could do it. If all of them happen together, game over.