A side effect of the drug culture, Guns and killing, Prescription drugs creating killers, Violent video games and murder, What do the mass killings have in common, Why are there more mass killings, Why killers kill 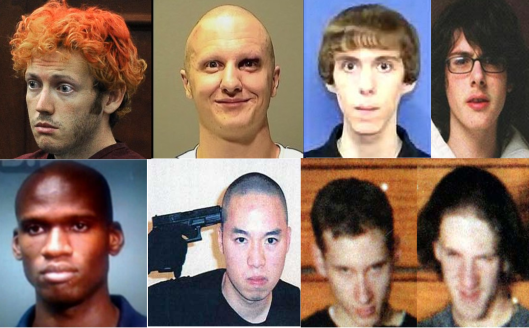 In the wake of huge increase in mass killings in the U.S. the question why is not really being addressed. The mass shooting at the Washington DC Navy Yard was but the most recent in a spree that goes back to Columbine High School. The death and destruction seems all the more disturbing because it is not only random but increasing in frequency. It seems for media pundits and low brow thinking liberals the availability of guns is the culprit. The fact that guns have always been available, and, if anything, even more available in times past is irrelevant in their minds. It seems guns are a convenient scapegoat. They provide “ammo” to the antigun crowd in their push for gun control and alleviate the need to think about the real causes of the carnage.

The fact is there are common denominators in the recent spree of killings. Beyond the fact that life in general has been cheapened and childhood mental illness is on the rise under the specter of increased liberal influence, the recent shooters have other things in common. In nearly every case the shooters were taking psychotropic drugs. Drugs whose side effects include increased irritability, possible paranoia, thoughts of suicide and worse. The second commonality is the propensity to be loners whose main source of entertainment is video games where killing for sport is the main focus.

In a world of better living through chemistry, drugs are often approved whose efficacy is questionable but their dangers are not. If a drugs worst side effects are only seen in one out of every million people it is usually approved without question. Of course one in a million is high odds when you are talking about creating murderous psychopaths via a drug taken by millions.

These drugs are often a double edged swords with addictive properties as well. It is often said that a patient went crazy after stopping his medication. What the doctors are essentially saying is, because of the drug side effects patients become more dangerous to themselves and others when they go off the drugs than if they had never taken the drugs at all! Others just progressively lose any sense of reality while on their medication. What is being created are real life Doctor Jekyll and Mr. Hyde scenarios with a twist; over time Doctor Jekyll slowly fades away.

The addition of violent video games to the mix seems to be the trigger to setting up the mass shooters objective. As reality fades and is replaced with paranoid rage, the imaginary world of video games melds with the real to the point the two become one. In a drug induced altered reality the step from video game killer to mass murderer seems to be a small one to take. In the end following the doctor’s orders becomes a countdown to terror.

While drugs and a preoccupation with violence for violence sake does not explain all the random mass killings, it covers a majority; Aaron Alexis being only the latest in a long line that follows this pattern. There are others who withdraw into a world of madness with little or no help. Such is the lot of mankind, But, when the level of psychopathic killings spike upward it says something more is at work. How many more of these time bombs are out in society is unknown. What is certain is the present course of blaming guns is not the answer. It is high time to look at a culture that embraces quick fixes and accepts senseless violence as entertainment.