American's ignorant about history, Define liberty, Girl Arrested for buying water, ignorance about the American Revolution, Lady liberty against a flag, Police with guns out of control, What is a classical liberal, What is the difference between Liberty and Freedom, Why does liberty matter, Why is liberty important 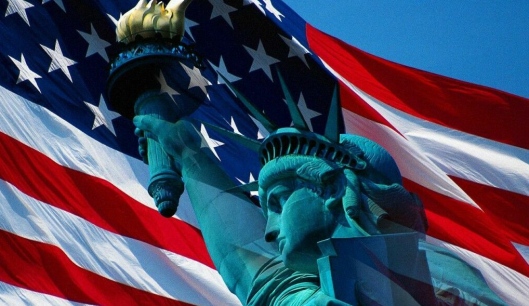 Liberty and Freedom are often spoken of together and many think them synonymous. In reality the meanings they convey are very different. There is a reason liberty is often cited as the reason for the War for Independence and not freedom. The fact is freedom is an outcome of liberty. Where liberty leads freedom follows, whether for ill or good. While slaves yearned for freedom it was liberty that drove the founding fathers to cleave their mother country’s apron strings.

Liberty today is a word whose meaning is further clouded by those who speak of it as having a positive or negative sense. No such vagueness appeared in the mind of Patrick Henry when he said “give me liberty or give me death.” For liberty had but one meaning to Americans then, it was to be free from the control and interference of government. While one could be said to be free even if tea is taxed to the point one must avoid its pleasure, elected leaders are replaced at the whims of a king an ocean away or even if one is forced to house a soldier in their home but living in liberty one is not. Government ought to be a tool of the people, its power limited and influences few. Liberty to that end is the absence of governmental control and interference in the lives of men.

While perfect liberty is chaos, what the founders of America fought and died for is what Washington called Ordered Liberty. A liberty that endowed the government with just enough power to insure the peace, maintain individual rights and protect society. The tenant of Ordered Liberty formed the foundation of nineteenth century liberalism (A.K.A classical liberalism), a liberalism that sought to form a government and society that created the perfect balance of liberty and government. To that end John Stuart Mill wrote On Liberty and more recently Friedrich Hayek wrote The Constitution of Liberty. Unfortunately the balance they sought has long moved from liberty and towards the elitist power brokers who reside within the government’s ivory towers. Today liberty is tested and suppressed in ways those that fought for it over two and quarter centuries age would of found intolerable.

When police set up checkpoints to check all drivers for guilt of a crime it is liberty that is being taken away. Liberty is also at stake when the NSA gathers personal data on every American and even listening and records phone calls without a warrant, liberty is sacrificed. This is not to mention illegal actions like the IRS scandals and a President who repeatedly ignores to law when he finds it convenient to do so.

Rights, once considered inviolable, like freedom of religion and the press, are also coming under fire from a government who long ago left its rightful place. What is being witnessed is a decline in liberty that has been taking place for decades if not most of the last century. A trend towards ever increasing government involvement in people’s lives that has meant a corresponding loss of liberty and freedom. Where is freedom of movement when one can be stopped at random anytime and even forced to have blood taken against your will if your breath smells like gin? Freedom of association and to be secure in ones property, essential parts of the Constitution and the Declaration of Independence, was forever infringed in the 1960’s. In striking down one abominable attack on liberty, Jim Crow, the Civil Rights Act of 1964 enshrined into law another. By declaring it unlawful for those who make a profit from their property to limit who they service the act struck a blow against liberty. Hate and bigotry, while despicable, have no place being made against the law than they do being instituted into it.

Liberty’s downward spiral seems almost unstoppable. From the local to the federal level, people are finding themselves under siege by a system out of control. A recent chilling example occurred in Charlottesville, Virginia. A young woman buying water and ice cream was accosted by six plain clothes officers with weapons drawn. The panicked woman frantically dialed 911 fearing she was about to die. Her crime it appears was the fact she was twenty (drinking age is 21) and one of the officers thought the designer bottled water she bought was beer. The police arrested her even after they knew the facts and she spent the night in jail. The police defended their actions as appropriate, they apparently see no problem with using the threat of deadly force for the suspected purchase of alcohol or putting an innocent girl in jail overnight. When some police taser grandmothers, shoot knife wielding drunks and arrest people video taping their actions they do so knowing a system that no longer values liberty will justify their actions.

Today, the last of a long Independence Day weekend, the one thing central to the July 4th celebration, liberty, is lost in barrage of fireworks and picnics. As government agencies trade in their roles as servant for the position of master it is past time for people to take notice. For just as liberty is a noun for which many fought and died it is also a verb. A call across the generations to defend it while it is still possible.

A sad but relevant commentary on the state of American ignorance and why its most valued tenant is slipping away.