Last week a boy was cornered by a group of youths who poured gasoline on his head and set him on fire.  The reason for the crime is not a mystery. The boys made sure the young 13 year old knew the crime he was guilty of, and the reason he deserved such a horrific attack.  The crime and the reason are the same, the boy was white. The perpetrators were older black teenagers who, for some reason, felt race justified both them and their actions.

This attack maybe unique in its horror, but unfortunately the justification given for attacking him is not. These types of attacks are on the rise and probably vastly under reported by the media. Where race attacks by whites on blacks are front page news, the opposite is often ignored. Even this attack, if the race profiles were opposite, would probably be pasted not only sea to shining sea but from Beijing to Hollywood. This is not the real tragedy though, the real tragedy is the simmering pot of racial hatred that is being fomented in black neighborhoods. It is the hatred of others, especially whites, that is at the heart of this and other attacks. A hatred that has been justified in the minds of the perpetrators by what they have heard from the mouths of various activists.

The backdrop for this attack, and some of the flash mob attacks seen late last year, is a hatred that has been being propagated in poor black neighborhoods for decades. The recent attacks are merely the bubbles coming to the top of a pot that is nearing the boiling point.  Many who are raised in mostly white neighborhoods, or have had little contact with racial politics of the inner city, are mostly oblivious to what has been happening. If they have heard anything at all it is probably the rants of Louis Farrakhan, a man they see as a radical aberration and not representative of mainstream black America (akin to someone like a David Duke). Although Farrakhan and the Nation of Islam have been pot stirrers for years and have a significant following in the black community they are far from the only ones.

From churches like Trinity United Church of Christ in Chicago (The Rev. Wrights and Obama’s old church), to the halls of Ivy League schools, to the depths of Compton there are people preaching hate and demanding “justice.” Organizations like the New Black Panther Party, African People’s Socialist Party, The Malcom X Grassroots Movement and others have been teaching hate and advocating violence for years. Their mantras revolve around social and economic justice and their threat is no justice no peace. 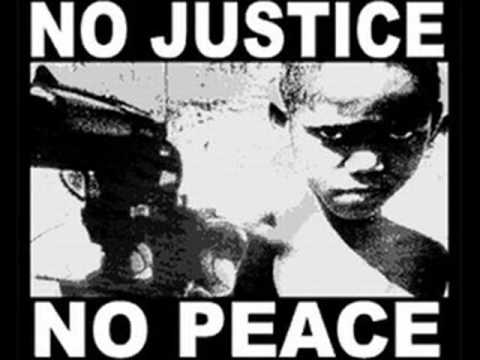 Although, in your face hate mongers are everywhere, there are even more low key activists using less vitriolic but still damaging language. The message they’re preaching may not be inherently violent, but they nonetheless induce hate and feelings of justified rage in their target audience.  Calling themselves names like community organizers, and advocates for social justice, they make a living inspiring envy in those living in despair. As was pointed out in the article Race-Jacked, there are many people making a good living keeping the racial wounds of the past fresh. Whether we are talking a Rev. Sharpton telling black youths they have no opportunity to get ahead without government intervention, or a Obama cohort Derrick Bell trying to highjack higher education, the message to America’s black youth is the same, whites are to blame for your troubles. Social justice promoters have been telling black Americans for decades that they are all victims and have the right to seek compensation. In communities across the U.S., these opportunist have been creating seeds of despair and watering them with the politics of envy. Generating an intense sense of entitlement among many in the black community, as well as acrimony towards those they see as denying them their due.  Why would it be surprising that some black youths decide to strike out in anger at those they have been taught to see as their tormenters, especially in hard economic times?

This is by far not the total picture, there are many within the same communities that are trying to spread messages of hope and opportunity by teaching self-reliance, independence and individual responsibility. When pointing out the hypocrisy of the left these purveyors of hope are often called Uncle Toms, disparaged as not being black or not being down with the struggle. It may be true that these brave souls are swimming against the tide,but they are nonetheless making headway. Unfortunately, as their numbers have been increasing so has the depth of the racial hate in America’s inner cities.

The deepening racial divide needs to be stopped but the left has no interest in its abatement. Dividing and exploiting those divisions is inherent in the progressive strategy. Whether we are talking rich and poor, or black and white, the left has always tried to divide groups into opposing camps. By depersonalizing issues and turning every dilemma into an us versus them problem, they are able to exploit situations for political gain. This strategy is inherently dehumanizing and reduces people to caricatures instead of individuals.  It also creates the kind of chaos, hatred and despair that leads to thirteen year olds being set on fire for no other reason than the color of their skin.

Now it should be noted, that chaos and despair are not the goals of most progressives. For many their methods are nothing more than a reflection of what they believe. In the end it does not matter, whether the strategy is a deliberate plan, or a result of a twisted world view, the results are the same.

History is filled with societies that followed similar paths. The most disturbing examples are the mass murderers Pol Pot and Chairman Mao. Pol Pot created unfathomable hatred of the rich and killed millions to create a communist Shangri-la. Of course all he created was hell on earth. The richer city dwellers had comparative wealth compared to much of the country, proof in the minds of Pol Pot’s mobs that they had robbed the poor. That these people were also poor just a couple of generations earlier and the cities they lived in were built by them was of no consequence. Logic and individuals are of no consequence to those on missions of “justice.” Chairman Mao added the twist of culture to the class warfare model, and in the end was just as deadly. These are extreme examples of where the current social justice course leads.

Social Justice crusaders utilize the emotion of envy in the same way as the communists, and feed the same type of blind hatred. Their primary aim is always tearing down those that have achieved success, helping people to advance on their own is only an after thought, if it is given any thought at all!  They tell the High School dropout, the welfare mom, and the drug addict their poverty is due to exploitation and oppression.  They speak of hope but preach despair. They will speak out against racism only to make everything about race. Hatred, anger and despair follow them wherever the go with violence all but inevitable. For their part, they seem oblivious to the consequences of their chosen path. In the end, if race riots develop and the body counts start to rise they will just blame it on others and double down on their destructive policies.

If you want a further explanation of social and economic justice and why it is reprehensible to conservative thought click here.

If you liked this pass it on