A few short days ago Andrew Breitbart died a sudden unexpected death.  As noted in the memorum did on this site it was on the eve of a release of material on President Obama’s past activities.  The content and methods of the releases were a closely guarded secret but the aim was not.  Andrew wanted the President to get the vetting the media refused to do.  He wanted the American people to know who this man was and what his mission was.

Sunday evening the vetting of the president began.  Although the total content of the research is still a closely guarded secret the first of a now promised series of articles has now been released.  The first salvo is on a subject Newt Gingrich has already brought up, the President’s adoration t of Saul Alinsky and active support for the man’s methods.  Newt famously brought up that the President had a picture of Alinsky hanging in the White House, a rumor the White House would neither confirm nor deny.

As the poster below shows (click on poster to see Breitbart article and high resolution version of poster), the President was one of the premier speakers at a play about Saul Alinsky. Saul Alinsky, the man who literally wrote the book on how to force a society to redistribute its wealth.  He took part in discussions with a panel made up of the who’s who of socialist activism in America.  He is said to have spoke passionately and on key about a man that praised stealing from businesses and destroying property.  He was one radical among many on the panel that counted themselves as Alinsky’s disciples.  Knowing this explains the President rushed to try to embrace the public defecating/property destroying occupy protestors.  He simple sees himself as one of them and he supports all that they do as long as it does not affect his overall agenda. 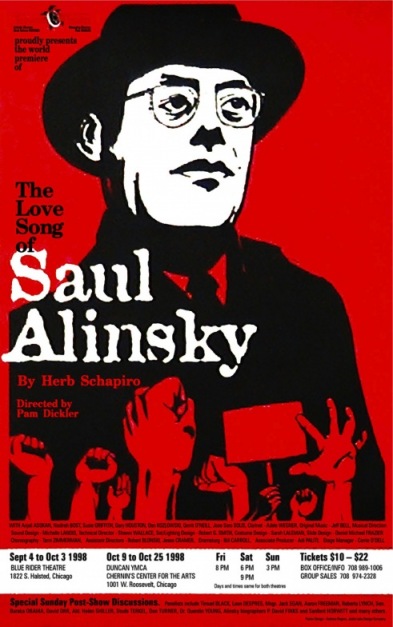 For those of us who have been reading about the President’s past for some time this comes as no surprise.  This is a man that was the conceived by the union of a socialist activist mother and a Kenyan communist father.  He was raised mainly in Hawaii surrounded by his mother’s socialist friends and mentored by a communist agitator come poet named Frank Marshall Davis.  It seemed from the start he was pre-ordained to become a radical.

At Occidental college in California his radicalization continued where he purposely hung out with Marxist professors and liked to discuss neocolonialism, Eurocentrism, and resisting bourgeois society.  While at Columbia he liked to go down to Greenwich Village and attend socialist seminars.  (All the preceding is chronicled in his book Dreams of My Father.)  Later at Harvard he started polishing his image but it is this period that Breitbart claims to have tapes showing he was just as radical.  After completing his education he moved to Chicago and found a Black Liberation Theology church.  The church fit him to a tee; its tenants were based in a convoluted mixture of Marxism, black power activism and selected teachings from the New Testament.  It was here in Chicago that he fine tuned his persona, speaking to groups and teaching them how to take advantage of and manipulate the system.  It was this activity that got him noticed by those of the far left seeking someone capable of taking the fight inside the belly of the political beast.  Friends like Bill Ayers and rich co-parishioners helped launch his rather modest political career in state politics.  A stepping stone he took full advantage of.

When Barack took aim at the White House none of his past seemed to matter. The press was more interested in covering for candidate Barack then investigating him.  When video of the Reverend Wright came out and the media was forced to deal with it but they did so as low key and apologetically as possible.  When Barack Obama stated he had never heard his pastor make racist or radical anti-American remarks before and disavowed him the media’s weak in the knees response seem to say “we knew  it was really nothing.”  The fact that Rev. Wright was Obama’s declared spiritual mentor and that what he was preaching was central to the theology of the church was ignored.   They just pretended that Obama’s storyline that the radical viewpoints of his church and pastor where all new to him was plausible.  They acted like it was reasonable for someone to set in a pew for twenty years and never know what the church or the pastor stood for!  I suppose we can leave it to history to decide if this was the result of hysterical blindness or deliberate cover-up.

This leads us to Brietbart and his mission.  Correcting and setting the record straight was a Breitbart passion and one he looks to be continuing from the grave.  From what he wrote his website is going to be attacking not only Obama but plans to reveal the underbelly of some of the Republican candidates too.  There is no doubt that Obama will be the main target but revealing hypocrisy and lies was a passion with Andrew Breitbart that always has crossed party lines.  Andrew made a lot of friends and even more enemies in life and it looks like he will continue this trend even after death.

As far as the President goes, introducing the people of America to the real Barack Obama was one of Andrew’s goals.  This seems to have come from a particular disdain of those who stood on false pedestals and the fact he believed Barack’s agenda was destroying America.  That so many people believe in the press’s false narrative of him was something he wanted desperately to correct.  This latest revelation by Breitbart is not likely to change the narrative in many minds but the constant drum beat that is planned might.  The effects of this first sortie of a promised truth bombing campaign will likely be muted for two reasons.  Saul Alinsky for all his radical proposals and even more radical followers is still too esoteric for the average Joe who has likely never heard of him.  Add to this the fact that Americans are basically good trusting people and it is hard for them to fathom that those in power are not who they show themselves to be.  They look for and want to believe the best of people, especially their own leaders.  It takes either a dramatic event or a constant drumbeat to get them to understand sometimes that all is not what they think it to be.  Radicals like Obama do not make this any easier since they are prone to hide their true agendas, they know it is better to implement their agendas slowly if they are to avoid public backlash.

Today we can be sure the Radical and Chief is not shaking in his boots but we can also be sure his handlers are trying to put together damage control none the less.  In the coming weeks Breitbart’s plan will unfold and hopefully start to chink away at image Obama has fomented in the minds of U.S. citizens.  If it all works the truth will be told and finally the President will be getting the vetting he never got when he was running the first time.  The American people deserve to know who this man that promised to remake America is and what his vision for the country really is.

1 thought on “Radical and Chief: The Vetting of Obama Begins”