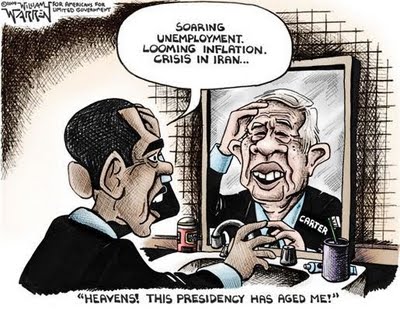 In the 1970’s the U.S. was in a world of hurt.  Double digit inflation, high unemployment and a shrinking economy had left the Keynesian economist stumped.  It seemed there was no way out of the malaise and the U.S. was just going to have to live with it.  At least that was the consensus of many on the left and their Keynesian advisers who said you can’t fight inflation and a recession at the same time (in fact, according to Keynes, you couldn’t have them at the same time).   President Carter as one of his first acts donned a sweater and called on the American people to do with less.  As prices spiraled, unemployment climbed and confidence dwindled President Carter made his famous malaise speech.  It was this address that more then any other came to define him.  The message was simple; the U.S. had to learn to do with less and it was time to quit complaining and sacrifice for the common good!

Carter throughout his presidency advanced the notion that America has had its day and now it was time to accept the fact the party was over.  To him it was now time for America to step back, accept a lesser more equal place in the world and to accept a lower less energy intensive standard of living.  Carter’s speech both cemented him in the minds of the American people as a weak and ineffective leader and added to the melancholy of the American people.  Fortunately it also opened up the door for an optimistic and charismatic president who did not hold to the Keynesian myth; Ronald Reagan was the anti-Carter and went on to show the world America was not finished yet.   Reagan used good old fashion Chicago School Economics to resurrect the economy while at the same time resurrecting America’s belief in itself.

Today we have inflation creeping in, massive debts, high unemployment (much higher than the latest stats reveal) and an economy that stubbornly refuses to recover no matter how much money the Keynesian economist throw at it.  Additionally we have a president, like Carter, who does not see America as truly exceptional.  President Obama is all too happy to see the U.S. take up a lesser

more equal military and economic role in the world.  Like Carter, Obama thinks it is time for Americans to shut up and accept less for the greater good.  It is no wonder that American satisfaction with the way things are going is reaching lows approaching Jimmy Carter’s.  When the chips are down and American people need something to believe in; the last thing they need to be told is abandon all hope.  This essentially what the President did when in Iowa he told onlookers the American Dream was to not go bankrupt and be able to pay the bills.  In other words they should not seek a better life for themselves and their posterity, their only hope should be survival.  It may not be Carter telling people to stop whining and wear a sweater but the meaning is very much the same.

Of course there is one area in which President Obama outshines Carter.   In the area of class warfare Obama is almost in a class by himself.  Demonizing the rich and disparaging the successful in ways we haven’t seen in decades.  He seems to want to tear down the titans upon whose shoulders the U.S. was built so that the poor can stand on the ruble.  Never dreaming that success does not have to be a zero sum game. It seems they do not care if the poor succeed or not, as long as the rich do not have their day.  Margaret Thatcher showed why she was such a great partner to Ronald Reagan when she faced down similar rogues in the Labor Party of Great Britain.

Of course the class warfare does not stop with income gap grand standing, wealth redistribution and taxation are also on Obama’s plate.  He has been exclaiming to all that will listen the tax code needs to be more fair and the rich need to be pay more.  Currently 49.5% of the people pay no federal income taxes, so by fair he must mean that number needs to be 51% or more.  This despite that most Americans believe everyone should have some skin in the game, even if it is a trivial amount.  A majority also believe that the rich already pay enough.  It is also a fact that even if they decided to take all the income of the richest Americans it would not come close to stemming the flow of red ink in

Washington.  Facts of course do not matter to those who have an agenda.  They will not be swayed nor eyes diverted from their goals no matter how much they go against reality; no matter the cost.  To them those that have gotten rich creating wealth for society are un-American and their only road to redemption is to take on even more of the tax burden; even if it leaves all of society poorer.

When it comes to the rich this president’s attitude seems reminiscent of yet another Democrat who when times got tough blamed the American people themselves and the rich specifically.  He declared it was their greed that brought on the turmoil they now faced and it was time to learn to get by.  The president was Franklin Delano Roosevelt.  Amazingly the American people re-elected him time and time again and were rewarded by being able to barely get by year after year.

The question for the American people will soon be what their future course will be.  Should they throw out their modern Jimmy Carter who thinks they should be happy just being able to pay their bills?   Will they accept the contention that they should feel guilty for being Americans?  Is success now to be equated with theft?  Will they re-elect a president who seeks to purge them of their sin of exceptionalism?  Or, will they reject the man and his message and choose to work for a brighter future?

If This Made You Think Pass It On