Tuesday President Obama chose the spot where Teddy Roosevelt made a famous speech about the plight of the working class and ranted against the tycoons of the day to do pretty much the same.  Trying his best to channel Teddy the president ranted against unfairness and the plight of the middle class.  He seemed to have gotten his Teddy like rhetoric down pretty good but he fell short of having Roosevelt’s charisma and animated demeanor.   Maybe if he would have walked around the podium slamming his fist into his opposite palm as he spoke or wagged his finger at the audience during his speech it would have been a more convincing impersonation.  Of course his 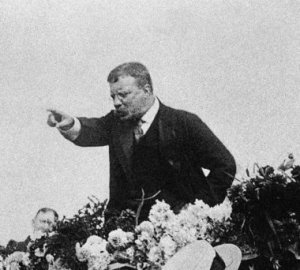 need for a teleprompter kind of makes impassioned and animated speeches a little difficult.  Anyway it was appropriate that the latest progressive president make a speech in the footsteps of the first.  After all Roosevelt was the first to win office as a great defender of the middle and working class against the tyranny of rascally “Robber Barons”.

On a serious note Obama’s speech did highlight one of the most long lasting claims of the Democrats.  That is the claim that the middle class is disappearing.  It has been being made for such a long time you would think it would have disappeared already or at least be noticeably smaller. To the Democrats it seems the middle class is a slowly dwindling neighborhood with families slowly moving out as times get tough. Soon all that will be left is dilapidated slums.  Those making such proclamations miss the mark and show themselves ignorant in both history and economics.  Two fundamental facts they miss are.

On the first point, most people are members of at least two of the three main economic classes in their lifetime.  Some of course make it to all three.  In a free society with a healthy free market people move up and down the economic ladder all the time.  That is normal, what folks miss is that this movement tends to be more up then down.   Fortunately, for those who still have minds of their own, that can be conclusively shown.  One way is to look at a study by the U.S. Treasury Department.  They got the bright idea to follow individual taxpayers from below the poverty line for ten years.  What it showed is what most people should know just by looking at their own lives and the lives of friends and acquaintances.  58% of those that were in the bottom 20% of wage earners moved up.  Some of that group (5%) made it all the way to top 20%.  The study excluded college student and those just starting out which makes the statistics even more impressive.  It appears that going from rags to riches is not as uncommon as some people would have you believe.  Added to this is the fact that the study also showed that average incomes on a whole raised 24% in the same period.  In other words everyone was getting richer with even the poor were better off than before.  Now I am sure there are some liberals rolling their eyes and saying they do not believe it.  Well you can believe it because it is true.

The fact is that Treasury Department data proves that over all the percentage of those in the lower income brackets has been dropping, middle income has been staying nearly constant and the upper income has been increasing.  Not just for a decade but decades.  This should not be surprising.  If you ever visit the homes of the founding fathers, some of the leading men of their day, you will find their houses are rather unimpressive.  Their wealth, although much lauded in their lifetimes, somewhat less impressive today.  By the end of the Victorian era, a little over hundred years later, the average farm house in America out shined the homes most Aristocrats a half century before and all the homes of the founding fathers.  Bigger, better appointed and more comfortable.  What happened?  The Robber Barons happened.  They got rich by providing cheap lumber, cheap steel, cheap lantern oil and new technology to the masses which in turn made them wealthier too.  Yes those rascally Robber Barons that were so against the common man had made the common man rich compared to aristocrats of a short time before.

Just like in the old days Americans are still getting better off over time not worse off.  More are moving up each year than are moving down, even for those living in the middle class. The study showed about twice as many improved their income status then lost status.  About the only people who do not actually improve over time are those that are already rich.  They drop income brackets at about the same rate as those in the lowest increased theirs with some even dropping down to the lowest!  It appears maintaining the type of high productivity levels needed to stay rich is not easy. Even so the overall numbers of wealthy keeps on increasing. It appears more than enough people move out of the middle and lower classes into the upper to make up for the loses.

The fact is Americans have been getting wealthier as a group with the number making it to the top constantly increasing. This has been happening in just one decade but decade after decade since the country was founded.  This has been shown not just by the Treasury Dept. but countless other studies too.  The truth is the average person does not need a study to confirm what he can see for himself.

For those wondering how this can be, especially since Obama said the rich are getting richer and the poor are getting poorer.  Well as Mark Twain once said, “there are three kinds of lies: lies, damn lies, and statistics”.   Statistics if cherry picked can show pretty much anything.  The fact is some years do show ballooning incomes for the top 1-5% and stagnant or even lowering incomes for the lowest.  These events use to be rare and happen when easy money (the Federal Reserve holds rates down and does not let them balance to natural demand) and market forces combine to create a bubble.  These used to be rare but since the Fed has made low interest rates a habit we have had two in short order.  First we had the Tech Bubble that burst in 2000 and then we had the Housing Bubble that burst in 2008.  If you cherry pick statistics, especially just before the ends of the bubbles you will get an unnatural curve that seems to back up what the liberals are saying.  Of course as soon as the bubbles burst high income people take the brunt of the income hit.  The large layoffs on Wall Street and the millionaires that went broke after the last crash are not mentioned by those who have an agenda to justify.  It is also dishonest to seek out small exceptions and pretend they are the historical trend.

The fact is what history shows us is the opposite of the demagoguery* the President is selling.  Producers given the right tools do raise the standard of living for all.  History proves it.  What it also shows is that unsound monetary policy and government interference in the market is always disastrous in the long run.  (The only period of long term stagnation in U.S. history was the Great Depression which also corresponds to the period of the greatest amount of governmental tinkering in the economy)  Static classes come with government social justice programs, welfare state programs and excessive regulations. These things make being unproductive tolerable for many, new businesses nearly impossible, advancement less lucrative and a middle class with nowhere to go.  This is the society that progressives see as progress and the one their policies will bring to America.

Demagoguery: The art of using BS to dazzle the uniformed mind.