Arab Spring and democracy, Democracy and Freedom, OWS verses the Tea Party, Rule of Law, The danger of OWS, The U.S. not a democracy, Whats wrong with democracy 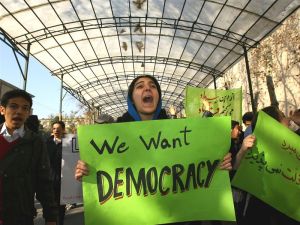 This is for many readers the first time they have heard this and may consider it some radical nonsense but it is not.  A quick search will find oodles of anti-democratic quotes from almost all the founding fathers.  It is true democracy is a core principle of the French Revolution.  The belief that society’s “General Will” should guide government was central to the French uprising but it had no part in the American War for Independence.  The American founding fathers saw principles and the Rule of Law based on those principles as a core value.  That is a far cry from the mob mentality that ruled the French Revolution.

To clarify the disconnect one has to only look to America’s own history.  For 3/4 of a century America was half free and half slave.  Rights of a minority were suppressed by the will of the majority.  Slavery in this type of scenario is totally consistent with democratic values.  What many recognized including the founding fathers is that slavery was inconsistent with America’s core values.  This highlights why democracy is often called mobocracy.  To see a modern example of democracy at its most hideous one needs to look no further the Arab Spring and its consequences in Egypt.  As the majority took control the minorities came under fire.  For certain Egypt is not a full functioning democracy.  Even so, the rape, murder and other attacks on the Christian population by the majority Muslim population is an example of the majority imposing its General Will on the minority.  Democracy in countries that do not have the core value of individualism (a true American core value) and the respect for individuals that infers, often degenerate into mob rule and dictatorship.

The only way a country and all its citizens can remain free is not through democratic processes but respecting the rights of the individual and adherence to the Rule of Law.  It is far better to live under a monarchy in a country where the rights of the individual are respected and one can rely on the rule of law then to live in a democracy where none of this is true.   It is forgotten that some of recent history’s worst tyrannical regimes had democratic roots.  Look at Nazi Germany or what is happening in Venezuela.  Democracy without respect for the individual and the Rule of Law to back it up secures neither freedom nor security for a citizenry.

This is one of the fundamental differences between OWS and the Tea Party. The Tea Party is an advocate for the Rule of Law and individual rights.  OWS is an advocate for democratic distribution of wealth and imposing its General Will on society. This conflict between the two outlooks harkens back to the French and American Revolutions.  OWS is connected in spirit and philosophy to the French Revolution whereas the philosophy driving the Tea Party folks is purely American.

This is not to say that democratic processes have no place in the U.S., they are essential part of the political process.  The point being is that just because a country makes use of democratic processes does not mean it is a democracy.  The main function of democratic processes in the United States is the election of political representatives and leaders.  Despite what many believe this is not because rulers gain legitimacy by having the consent of the ruled; the fact is we have no ruler but the law.  It is simply because it is the only way to assure leaders can be held accountable and removed as needed.   We also use democratic processes to make laws (both directly and through representatives), but even here it is the constitution that is the ultimate standard we go by.  The people cannot make a law that goes against the principles the country was founded on.  The constitution is the final arbiter of what will and will not be law, not the majority.  If there is a core democratic value in the United States it is this: the people, through their representatives or by direct vote, alone have the right to initiate taxes.  The principle that the only legitimate taxes are those that are imposed by the people themselves is a core principle and something that figured prominently in the American Revolution.

The fact is the blind push for democracy has been source of much misery over the past decades.   If the United States and other developed countries want to help the people of the world they need to promote the Rule of Law and individual rights, not necessarily democracy.  Democratic reform might be the best or even the only route to establish a free society in some countries.  It is also possible that it can be a short cut to even more repressive tyranny.  Democratic elections in a society that does not value the individual or respect the Rule of Law is like lighting the fuse on a a stick of dynamite.   The end result for countries that initiate democracy but ignore these core principles is often dictatorship.  South America, Africa, and the Middle East and their history of war and carnage are testament to this truth.

The more countries adopt the Rule of Law and embrace individual rights the better the world will become.  The corollary of this truth is also true; the more the world embraces the rule by might (either of the majority or a powerful minority) and societal based values at the expense of the individual the worse the world becomes.  One path leads to hope and freedom and the other misery, despair and endless revolution.

“If this article makes you think pass it on”

1 thought on “Why Democracy can be the Road to Tyranny”