Conservatives dissapointed, Defeat Obama at all cost, how to choose a candidate, No good choices, Republican Field, Whats wrong with the Republican field, Will the best candidate please stand up

Going into the primary season conservative American voters had one thing on their mind, defeat Obama.  To Democrats Obama maybe a disappointing would be messiah but to Republicans he has been a living nightmare.  Some would even go as far as to call him the worst president ever.  There is little debate as to him being a historic president, just whether he is historic due to his race or just historically bad depends on who you are talking to. 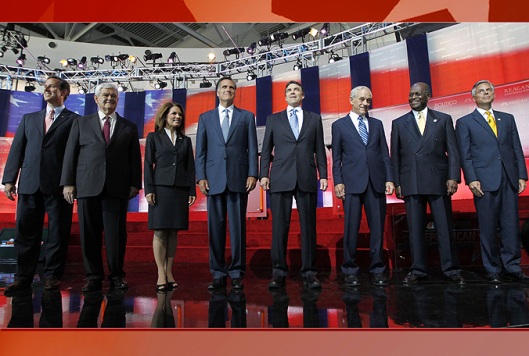 For the Republican’s part they have just come off a promising mid-term election only to run in to a grand field of mediocrity.  It is not that any of them would not be preferable to the present holder of the highest office in America but none of them seem to provide the kind of leadership we need at this point in time.

Take the on again off again leader Mitt Romney.  He is a great manager, able to triangulate and strategize with the best of them.  The problem is what makes him a great manager is exactly why Republicans do not trust him.  The man is soulless.  There does not seem to be a position he is not willing to trade or modify to advance himself.  In short you can not trust him.  Despite the conventional wisdom of the Washington Beltway, he is not the Republican savior in waiting. George Will probably is closer to the truth when he says he would “damage chances of the GOP“.

Romney is followed by choices that seem to be even murkier.  The present number two is Herman Cain, a business man and maverick that has got some people excited.  His tough down to earth working class roots make him a natural fit with conservatives.  The problem is his constant mismanagement of his campaign not to mention his tendency to shoot from the lip little to quickly makes him look like questionable presidential material.  I find it unlikely he could ever get support of over 30% of Republican voters for that reason alone.  Add to this his recent sexual harassment troubles and he has probably peaked.

Rick Perry was the Herman Cain of the electorate before there was a Herman Cain.  He is the great hyped hope that fizzled.  His pentecostal preacher style and tendency to get easily flustered, especially in debates, has turned off people as quickly as they grabbed hold of him. Add to that a talent to make the simplest subjects incoherent and you have a candidate that is unlikely to ever see the other side of 20% support again.

That leaves Newt Gingrich, a man for all seasons.  Even before he slammed Paul Ryan’s Medicare plan he has said and supported many ideas that conservatives have found repugnant.  In 1993 he supported individual mandates for insurance and seems to still do to some extent.  This should not be surprising to many who have followed the once house speaker.  Newt is a tinkering professor who likes the idea of government involvement in peoples lives.  He supported no child left behind and has thought paying kids to go to school might be a good idea.  Newts a big government guy and that puts him out of touch with conservatism.   As late as a few months ago George Will declared him not a serious candidate and most Republican voters for now agree.

The question is what does that leave us?  Ron Paul is a libertarian and although conservatives share some thoughts with libertarians we are not libertarian and neither is the Republican Party. Rick Santorum seems like an insecure little attack dog, the fact he spends most of his time attacking others and so little time providing his vision for America explains his single digits never seem to change much.  Michelle Bachmann is too flighty to be take seriously by most people.  Of course there is Jon Huntsman’s whose association with Obama is probably enough to sink his candidacy let alone his questionable conservative credentials.

I hate to say it but if Sarah Palin was to have a chance to best the Republican primary pack this was probably the year.  She had high negatives but if she could have shined in the debates those would have dissipated (and given the crowd that might not have been hard to do).  The fact is we are stuck with the cards we are dealt.

That brings us to the question how does one choose a candidate anyhow.  It certainly is not by figuring out who has the thickest resume or is the slickest talker.  The primary question to ask is does this person have the right perspective when it comes to the role of government.  What good does being a smart effective leader if you leading a Pickets charge to disaster.  If you have multiple candidates with the right philosophy then it is time to look at things like leadership skills, judgment and finally character.

With these words as the guide looking at the current stable of candidates I would say maybe Cain, Bachmann and Santorum might make the grade (The fact that Rick Perry was once a Democrat and supported Al Gore just makes his conservative credentials suspect).   Now given what was said above about these candidates this does not make things very promising.

Now one could go the Carl Rove route and figure whoever is most likely to beat Obama is the one to support.  This is what Governor Chris Christie decided to do when he endorsed Romney, he said we just can not afford another 4 years of Obama (true enough) and Mitt Romney has the best chance of beating him.  He did not say Romney was the best for the job or go on and on about how great Romney was just that he had the best chance at beating Obama.  Now I can’t slight Christie for his reasoning but I like George Will question if this is true.

The fact is that in the end Christie is right about one thing, we cannot afford 4 more years of Obama.  The man has already done tremendous damage to the U.S. and 4 more years will only make matters worse.  What we really need is a true conservative to put this country back on the right track who is dynamic enough to assure Obama’s defeat.  This of course leads us back to the field of candidates we have to choose from and the reality that that person does not seem to be among them; which is why this is the season of Republican discontent.

“If this article makes you think pass it on”