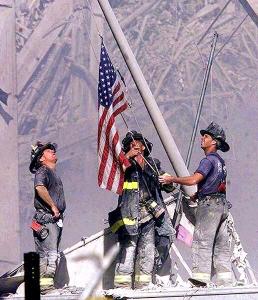 On 9/11 2001 the U.S. was attacked by a group of terrorist bent on curtailing the influence of the United States.  They, like many Americans, saw America as a country like any other whose influence is due to its economic might.  They thought they could scare the United States into leaving the Middle East and this would stop it from influencing their world.  They failed to understand that America is not just another country.  A mistake made by many Americans who also think this country is what it is, nothing special.  President Obama said Americans believe in American exceptionalism just like Greeks believe in American exceptionalism.   To those that think America is just like any other country I ask these simple questions.

Where else on earth was there free democratic republics before 1776?

Who spoke of the inalienable rights of man before Americans did?

What country has fought so many wars over questions of rights?

What other country has sent its sons to die for the freedom of others and ask nothing more then enough land to bury its dead?

In the nineteenth century Lord Acton, an Englishman, stated ” “Europe seemed incapable of becoming the home of free states.  It was from America that the plain ideas that men ought to mind their own business, and that the nation is responsible to Heaven for the acts of State-ideas long locked in the breasts of solitary thinkers, and hidden among Latin folios,-burst forth like a conqueror upon the world they were destined to transform, under the title of Rights of Man”.  It was true that states built on inherited power could never conceive the truth that as Tocqueville put it had “been nurtured in the townships and municipalities, took possession of the State”, that being that it is the people that are sovereign and all legitimate power comes from them. In the twentieth century a Canadian expressed his feelings about America, the broadcast by Gordan Sinclair has since be replayed many times.  Similarly an article by a Romanian Journalist expressed his views on America after 9/11

What the terrorist and many Americans including President Obama do not understand and many others outside America do is that America is an idea as much as it is a country.  A place that shows freedom is possible, people can be good, that opportunity does exist.  A place where different faiths and cultures can get along.   The world knows it is true because there is an America.  If people are taught individuals have rights, that freedom depends on the rule of law and property is respected then all is possible.  These are the ideas that form America in the minds of all who desire to live free and no terrorist attack or financial crisis can destroy them.